"From ACL/MCL Reconstruction to the NFL MVP- 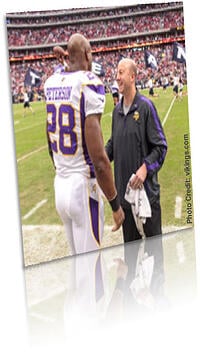 On December 24th, 2011 Adrian Peterson, while being tackled, incorrectly planted his leg during a run and tore the ACL in his left knee.  Following surgery, Peterson and Viking’s Head Athletic Trainer, Eric Sugarman, began an incredible rehabilitation journey.

After 8 months of rehabilitation, Peterson took the field in the Viking's season opener. He went on to have the best season of his career finishing with 2,097 rushing yards and being named the NFL’s 2012-2013 MVP.

Join us for this free webinar to learn:

*Continuing Education (you must attend the live webinar in it's entirety):

You may wish to petition your certification agency for CEUs. If so, send an email to patryan@icaa.cc to request a confirmation of attendance.

Eric Sugarman enters his 17th NFL season in 2013 and his 8th with the Vikings. Sugarman has been part of 6 Division championship team since 2000 and 8 playoff-bound teams.

During his tenure with the Vikings, Sugarman and his staff have been instrumental in helping several players return from severe injury by creating or enhancing rehabilitation protocols. During the 2012 offseason, Sugarman and his staff worked with RB Adrian Peterson on his remarkable comeback from a severe knee injury in late December 2011. Peterson returned to action for the 2012 season opener and went on to exceed all outside expectations by rushing for 2,097 yards, the 2nd-best season in NFL history, and earning NFL Most Valuable Player and Offensive Player of the Year honors in the NFL along with 1st-Team All-Pro and Pro Bowl recognition.

Sugarman’s staff has also overseen the rehabs of LBs Chad Greenway and E.J. Henderson, who each suffered season-ending injuries in their careers but returned to earn Pro Bowl berths.
With the Vikings, Sugarman supervises the evaluation and care of all injuries sustained. He and his staff implement and maintain proactive treatment and rehabilitation programs.

The Vikings athletic training staff have broad-based experience in athletic training and have trained under some of the most respected professionals in their field. The staff prides themselves on being proactive while using the most current concepts, modalities and principles. The entire athletic training staff are Performance Enhancement Specialists through the National Academy of Sports Medicine. During the 2012 offseason, the Vikings staff was trained in the Advanced Graston technique, a patented form of instrument assisted soft tissue mobilization that works to effectively break down scar tissue and fascial restrictions. Sugarman has worked closely the past several years with the Nike SSP team. He recently added a sensory station in the athletic training room bringing many of Nike SSP’s vision concepts to the Vikings team daily. Sugarman also established a strong working relationship with Starkey Hearing of Eden Prairie, allowing him to bring state-of-the-art hearing enhancement and ear protection to the team and staff.

Sugarman spent the 1997-99 seasons with the Chicago Bears and the 2000-05 campaigns with Philadelphia. Sugarman got his first taste of the NFL as a summer intern for the Bears’ athletic training staff from 1993-95.

Sugarman joined the Bears as an assistant trainer from 1997-99 before moving to the Eagles in a similar role in 2000. The Eagles were noted for progressive rehab programs. That athletic training staff played an integral part in helping Terrell Owens’ return from ankle surgery during the regular season in time for Super Bowl XXXIX.

He is an active member of the Professional Football Athletic Trainers Society, where he has served on several committees. He currently sits on the Advisory Board of the Rehberg Konin Group. Sugarman is also an American Heart Association Basic Life Support, AED and First Aid certified instructor. In 2003 he received the PFATS’ “Big Heart” award for saving the life of a fellow Eagles employee by performing CPR. In 2010, Sugarman and former Vikings Head Coach Brad Childress were co-winners of the American Optometric Association’s Eagle Award and in 2009 ESPN Magazine recognized him as the NFL’s Most Irreplaceable Athletic Trainer. In 2011, Sugarman was inducted into the Hazleton, PA Area Sports Hall of Fame.

Sugarman and his wife, Heather, reside in Chanhassen, MN, with their sons Jacob and Benjamin.