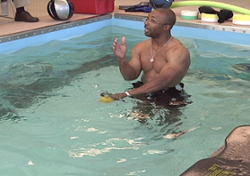 In this webinar, Murphy Grant, Associate Athletic Director for Sports Medicine at University of Kansas, will provide ideas for using the benefits of aquatic therapy for the rehabilitation of hip labral injury as it relates sports-related activity. The presentation will include a discussion of implementing aquatic therapy into an overall rehabilitation protocol. Murphy will demonstrate practical exercises used to strengthen the hip using varying water depths and resistance jets. He will also discuss the speeds, depth and progression for each exercise.

This webinar will provide specific strategies for developing a rehabilitation plan for the hip emphasizing the use of aquatic therapy as a medium to implement them. The strategies are developed to safely, efficiently and effectively bridge the challenging gap between rehabilitation and performance.

Murphy Grant, who has been a Division I athletic trainer for eleven years, is entering his ninth year as head football athletic trainer and his seventh as Director of Sports Medicine at the University of Kansas. Grant came to KU after five years as the athletic trainer for the men’s basketball program at Oklahoma State. He also served as the Cowboys’ strength and conditioning coach for two seasons.

Grant attended Quincy (Ill.) University, where he was a member of the football team from 1992-96. He graduated with a degree in athletic training in 1997. Murphy then went to Illinois State, where he served as a graduate assistant in the athletic training department while receiving his master’s degree in exercise science in 1999. The following summer, he spent one season working with the Boston Red Sox rookie league team. Prior to arriving at OSU, Murphy served two years as head athletic trainer at Missouri Valley College.

In addition to his athletic training work at OSU and Kansas, Grant has also worked with the television show The Biggest Loser, designing workout programs for its contestants specifically regimens affiliated with HydroWorx. Additionally, Grant has spent time working with the Chelsea Football Club of the English Premiere League and also Major League Baseball’s Washington Nationals. With his vast knowledge of aquatic therapy, he has been a lecturer at several aquatic based seminars.