USE OF AQUATICS FOR RECOVERY AND REGENERATION 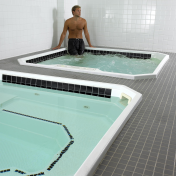 The session is designed to inform the participant of how the use of aquatic therapy during recovery periods can revitalize and amplify athletic performance.

According to the Institute for Integrative Healthcare Studies, the use of contrasting temperatures – also known as contrast therapy – has been used as a healing tool for thousands of years.  The contrast between heat and cold is believed to exert a physiological effect on the body’s pain mechanism.

In this webinar Lance and Brian will share ways to reduce soreness and enhance muscle recovery in your athletes using water therapy.  They will demonstrate how water therapy has given their athletes at Michael Johnson Performance an edge by performing recovery exercises in the pool to actively flush the body, add additional caloric ‘burn’ to the weekly microcycle and incorporate joint motion in deloaded states.

Attendees will learn how they can see better outcomes by utilizing active recovery in the water rather than passive recovery during breaks from intense training sessions in order to keep the muscles moving as they heal from exercise-induced microscopic tears.

Following this presentation viewers will be able to:

Lance Walker is a Certified Strength and Conditioning Specialist (NSCA) and a Registered Physical Therapist in the state of Texas. He previously served as Director of Performance Training at Integrated Athletic Development responsible for the training and/or physical rehabilitation needs of over 50 active professional athletes from the NBA, NFL, MLB, PGA, CBA, and CFL. Lance served three seasons as Assistant Strength and Conditioning Coach with the Dallas Cowboys. Lance brings an extensive background in strength and conditioning and sports medicine at the high school, collegiate, and professional levels. Prior to joining the Dallas Cowboys, Lance held performance trainer positions at the University of Oklahoma and the Casady School (OK), where he worked directly with athletes across many sports, including football, basketball, track, golf, gymnastics, and wrestling, among others. A 1993 graduate of Kansas State University with a Bachelor's degree in Kinesiology, Lance earned three varsity football letters and attained Academic All-Big 8 honors as a receiver. He also holds a Bachelor's degree in Physical Therapy from the University of Oklahoma and a Master's degree in Exercise Physiology from the University of Oklahoma. A well-recognized authority in his field, Lance has contributed to over 10 professional publications in sport science and presented at over 15 national conferences.

Brian Abadie is a Certified Strength and Conditioning Specialist (NSCA) and a Performance Enhancement Specialist (NASM). Prior to joining MJP, Brian served as a Performance Coach and the Director of Basketball training at Accelerated Performance Enhancement Center (APEC). At APEC, he implemented and helped design training programs for all athletes. While at APEC, Brian was also active in training and implementing workouts for the Trinity Valley Community College women's basketball team in Athens, TX. Brian spent one year at Montana State University where he started his Master's degree in Health and Human Development. He spent time working in the Montana State athletic weight room where he assisted with all sports, as well as individual skills work with the basketball team. Brian received his undergraduate degree in Communications from Texas Christian University, where he was also a part of the TCU men's basketball team for a year and a half.