The 2015 Healthcare Excellence in Aquatics Award

Recognizing those who achieve exceptional rehabilitation results through the use of advanced water therapy.

Voting has ended.
The winner is: Pullman Regional Hospital

Who doesn’t love a truly inspiring story? It is our human nature to be drawn to stories of individuals overcoming the odds, breaking through barriers and truly redefining what is possible. We have all been impacted, in one way or another, after hearing these remarkable stories. Behind these truly amazing rehabilitation stories are the clinicians and medical staff who also sacrificed to ensure these individuals would reach their goals.

The 2015 Healthcare Excellence in Aquatics Award will recognize clinicians who, despite all odds, garnered superior rehabilitation results through innovative and sometimes unconventional methods. Eligible pioneers rely on aquatics as a medium to help achieve exceptional results.

Read the nominees below and vote today! You can vote one time per day until January 28, 2015 at 11:59pm EST to support your top pick. The winner of the 2015 Healthcare Excellence in Aquatics Award will be announced in the HydroWorx Booth, #1310, at the American Physical Therapy Association's Combined Sections Meeting in Indianapolis, IN on Friday, February 6, 2015 at 6:15pm, during our cocktail event. Spread the word on twitter and facebook with #ExcellenceInAquatics.

AND THE NOMINEES (in alphabetical order) ARE…..

Tyler, a 9 year old boy with Spinal Muscular Atrophy had been working in the land physical therapy setting at Leg Up Farm for 2 ½ years before aquatic therapy was added to the facility. Over the course of his entire life, he learned to compensate for his weaknesses and limitations in various ways. Although he could do the tasks, he grew increasingly frustrated that they remained difficult and lost interest in completing the exercises. However, through therapy at Leg Up Farm, Tyler has been working on breaking down those compensations by strengthening other muscles.  For example, he taught himself how to get out of a chair by using his hands and pushing up into standing!

One of the first patients to receive aquatic therapy in their newly installed pool in conjunction with his land physical therapy, Tyler has now seen renewed confidence, increased gross motor function, improved body coordination and strength and agility scores.

Improving his abilities was a huge feat considering the challenges they had on land, but helping him reach his personal goal was even more rewarding. The one thing that he wanted was to be able to boogie board with his siblings at their yearly summer vacation to the beach. Thanks to the ingenuity of his physical therapist, he was able to reach that goal.

His physical therapist, Dr. Amy Arruda, used trial and error to devise a protocol that involved turning one resistance jet onto 100% and the other to a lower percentage (which gradually increased to 45%). With the pool set up in this way, Tyler would hold a boogie board and kick his way forward against the lower percentage jet and then turn around and “ride” the stronger jet to the back of the pool. Simulating the activity of boogie boarding made the strengthening activity fun and perfectly relevant to his goals.

Summer vacation is long gone, but he still requests that activity during his therapy sessions! 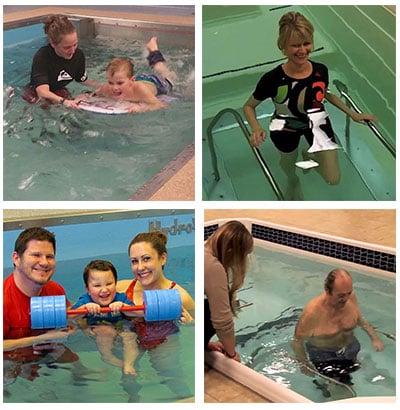 Winner Will Be Announced:

at APTA-CSM in Indianapolis, IN

VOTING IS NOW CLOSED
Vote one time per day until

Judy Bryan, age 55, had suffered from scoliosis since she was a child and did everything she could to avoid having surgery, including pain medications and a lot physical therapy. However, she became concerned as the neuropathy and pain worsened that she would be completely dysfunctional if she did not have surgery.

Judy finally had a lumbar spinal fusion from T9 to sacrum, totaling nearly half of her back.

After her initial evaluation, Brad decided to immediately begin rehabilitation in the pool. Judy struggled considerably and had very low endurance, but she was able to progress very quickly due to the warmth of the water. For her rehab program, they instituted a core/lumbar stabilization program, scapular and lower extremity strengthening exercises, functional movements and a walking program.

This allowed Judy to walk pain-free in the pool, and as a result her strength and endurance improved greatly.  Prior to therapy, Judy’s functional mobility was significantly impaired. Since beginning and upon discharge from her aquatic therapy, she is able to walk without pain on land, sit for longer periods of time, drive, walk up stairs pain-free and so much more!

Judy’s perspective on life has improved as well. The improvements that she has experienced physically as a result of using the pool, for just six weeks, have impacted her emotionally and psychologically. She felt her overall ‘spirit had been lifted’ and was thankful to regain so much more of her functional mobility than what she thought was possible.

This year's winner! Pullman Regional Hospital for the Innovative Therapy Program for a 3-year-old Patient Recovering from a Brain Tumor

At the age of two, Jackson was admitted to the hospital and diagnosed with hydrocephalus and a brain tumor that needed to be removed.

As a result of the tumor location and the surgery procedures, Jackson had expressive language, voice and gross motor delays and difficulties.

Jackson began speech and physical therapy on land prior to the installation of the HydroWorx pool at Pullman Regional Hospital. He was making gradual gains but was beginning to plateau. Ambyr Henderson, MS, CCC-SLP and Tim Williams, PT, DPT, were inspired to try an innovative form of therapy by combining speech and physical therapy in the HydroWorx pool and the results were astounding!

Both Ambyr and Tim saw noticeable results within the first two sessions of this combination therapy. For speech therapy, Jackson made the best progress in voice productions ever documented in his year of outpatient care.  For physical therapy they saw the greatest change in amplitude of movement. The therapy within the pool provided an environment that challenged Jackson to speak louder, articulate clearer, produce longer sentences, elicit stronger movements with greater control and reignite his engagement for therapy.

The installation of the HydroWorx therapy pool allowed Ambyr and Tim to try a unique way of providing therapy. Initially, they were unsure what Jackson’s response was going to be, but after seeing such a dramatic improvement within the first session they have decided to continue this style of therapy and plan to expand the program to other pediatric patients!

“As therapists, it has been an absolute joy to see all of the progress that Jackson has made in such a short time with introducing therapy in the pool.” – Ambyr and Tim

This public voting page will be open through January 28, 2015 11:59pm EST. Individuals are allowed to vote once per day. At the conclusion of the open voting period, the winner of the public’s vote will count as 1 vote. The finalists will also go through a judging process by a panel of six independent judges. Each judge's final selection will count for 1 vote toward the winner for a total of 6 votes in addition to the 1 public vote.

The winner of the 2015 Healthcare Excellence in Aquatics Award will be announced in the HydroWorx Booth, at the American Physical Therapy Association's Combined Section's meeting in Indianapolis, IN on Friday, February 6, 2015 at 6:15pm, during our cocktail event.

The 2015 Healthcare Excellence in Aquatics Award Recipient Will Receive: