The 2016 Healthcare Excellence in Aquatics Award

The 2016 Healthcare Excellence in Aquatics Award

RECOGNIZING THOSE WHO ACHIEVE EXCEPTIONAL REHABILITATION RESULTS THROUGH THE USE OF ADVANCED WATER THERAPY.

Congratulations to this year's winner, Lexington Regional Health Center for the Innovative Co-Treatment for a Patient with Rett’s Syndrome

Who doesn’t love a truly inspiring story? It is our nature to be drawn to stories of individuals overcoming the odds, breaking through barriers and truly redefining what is possible. We have all been impacted, in one way or another, after hearing these remarkable stories. Behind these truly amazing rehabilitation stories are the clinicians and medical staff who also sacrificed to ensure these individuals would reach their goals.

The 2016 Healthcare Excellence in Aquatics Award will recognize clinicians who, despite all odds, garnered superior rehabilitation results through innovative and sometimes unconventional methods. Eligible pioneers rely on aquatics as a medium to help achieve exceptional results.

Read the nominees below and vote today! You can vote one time per day until February 1, 2016 at 11:59pm EST to support your top pick. The winner of the 2016 Healthcare Excellence in Aquatics Award will be announced online on Friday February 5, 2016. Spread the word on twitter and Facebook with #ExcellenceInAquatics.

AND THE NOMINEES (in alphabetical order) ARE….. 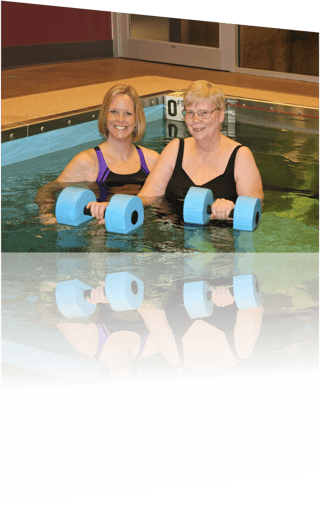 his patient is a 67-year-old female who had suffered from severe hip pain for years and needed a bilateral hip replacement. Three weeks following her first hip replacement surgery, she suffered a massive heart attack and had 5 stents placed. After the significant recovery period following this procedure, she was eventually ready to begin land and aquatic therapy.

As her cardiovascular endurance improved, the treadmill was added to her exercise program.  Following her discharge from skilled therapy, she continues to exercise in their HydroWorx pool 3 times per week to continue to progress towards her goals. During her initial evaluation, this patient reported a 9 out of 10 for pain in her left hip. At discharge, she reported a 3 out of 10 during activity and 0 out of 10 at rest. This patient progressed just as expected physically; she got stronger while her endurance and balance improved.

When she first arrived at therapy, she was in a deep depression. Originally, this patient was scheduled to have the 2nd hip replaced 6 weeks following the first. But due to her cardiac condition, she had to wait for at least one year. Additionally, she was in a great deal of pain because she was unable to take the pain medication needed to manage her post op pain and other symptoms. She felt that her future was uncertain and became very worried. However, the patient shared that the pool really helped her to realize that she was not going to die tomorrow. She could see that she could gain strength and function and return to her normal life without pain.

“I have the pleasure of working in a profession that makes a positive impact on peoples’ lives every day.  However, there are those rare occasions when I truly feel that I have changed someone’s life.  This therapy, this pool, my guidance may have actually saved her life.  I feel very fortunate to have been able to go through this experience with her.” 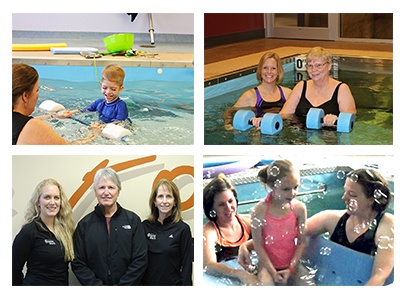 VOTING IS NOW CLOSED. Stay tuned to find out the winner.

Congratulations to the Second Place winner: Leg Up Farm for Helping a Pediatric Patient Conquer His Fears to Achieve Life Changing Results 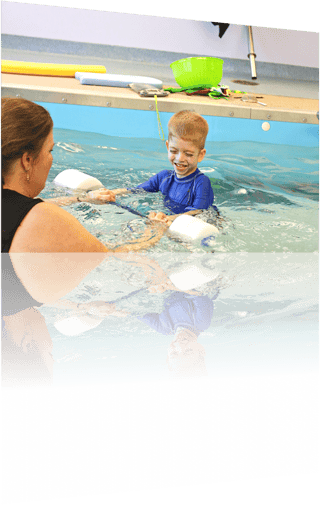 Dylan is a 5 ½ year old who experiences great physical limitations due to a condition called Congenital Fiber Type Disproportion and Developmental Delay. When aquatic therapy was first introduced to Dylan, he was fearful of the water, so much so that he was mostly uncooperative for the first 10 months of aquatic therapy sessions.   However, his parents and nurse advocated for the therapists to keep trying, as they saw the pool as a real opportunity for Dylan.   Luckily, Dylan’s therapists agreed, as they found it difficult for him to maintain an upright position during his land exercises, which impacted Dylan’s ability to build the strength he would need to one day walk.  Therefore, all knew Dylan’s best chance lay with being in the pool where his muscles and joints could be better supported during his exercises.

Dylan’s fears of the water started to alleviate about 5 months ago.  At that point, Dylan started working with a new therapist, Melissa Anderson.  At the same time, Dylan’s family and nurse started to consistently take him to a neighbor’s pool to assist in conquering his fears.  Through these combined efforts, Dylan started to realize that the gains he made in aquatic therapy would result in greater freedom and independence.

The results of these efforts have been nothing short of inspiring.  When Dylan first started to receive aquatic therapy 15 months ago, he was using a wheelchair to get around for long distances and, at home, he would often crawl or walk on his knees. Dylan’s joints and muscles did not allow him to attain typical posture in a standing position, therefore he was unable to walk independently.

Because Dylan received the support he needed to conquer his fear of the water, he and Melissa were able to maximize his therapy sessions, which have had a life changing impact. Melissa also developed a very innovative protocol for use in the water which increased Dylan’s muscle strength, balance, posture and overall range of motion.

As a result of the 5 dedicated months of aquatic therapy, Dylan is now able to walk on land up to 400 feet with a walker. He is able to participate in 45 minute aquatic therapy session with only a few breaks. In the pool he can walk on his own to chase a floating boat, throw a ball to someone outside the pool and jump and hop using the bar.  On land, he can walk upstairs while holding a railing with one hand and is also able to climb small rock walls at Leg Up Farm. He moves in the pool much like his typically developing peers which has certainly lifted his spirits.

Without the joint creativity of the therapy staff of Leg Up Farm and Dylan’s family and nurse, he might not have progressed as well as he did. This story outlines both helping a five year old boy overcome his fear of the water as well as the committed efforts of a therapy staff to help Dylan achieve his goals through specific exercise, which is an impressive feat when you consider the struggles encountered during the first 10 months of his aquatic therapy sessions.

Congratulation to the First Place winner: Lexington Regional Health Center for Innovative Co-Treatment for a Patient with Rett’s Syndrome 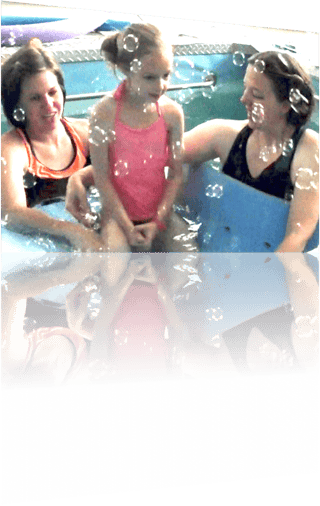 This patient came to Lexington Regional Health Center after receiving the diagnosis for Rett’s syndrome at age 5. She had decreased strength and balance resulting in frequent falls and decreased normalization of gait. She demonstrated a short attention span, frustration and random verbalization. She only communicated using single words or a few phrases. Upon her initial evaluation, this patient showed decreased quadriceps control and poor push off from toes along with little to no eye contact.

Additionally, she was not able to complete normal functional tasks such as going up and down stairs or sitting at the table for meals. She was not sleeping through the night. The goal was to have her become more independent and to be able to sit through school, as she was starting ½ day kindergarten in the fall.

Following the initial evaluation, she received co-treatment therapy in the pool with a PT and OT. Her sessions began with a 2 to 5 minute sensory exploration activity which allowed her to become acclimated to the environment and enjoy the sensations of being in the water. This was followed by a combination of “work” tasks followed by “play” activities. “Work” activities include sorting letters, numbers and colors, playing with a beach ball and positional tasks (up & down and in & out). Play options include blowing bubbles, singing, swimming and jumping. The therapists often use the jets for both resistance and calming effects. Speech therapy has recently been involved in her aquatic sessions, as well.

As a result of her dedicated and innovative therapy sessions, this patient is now able to sit through school for 6 ½ hours. She can climb in the car by herself, is able to sleep through the night, can verbalize in 1 to 4 word answers and convey how she is feeling. With therapy, she has exhibited gains towards all functional goals. She is able to walk without falling or tripping. She has responded to aquatic therapy with great enthusiasm, increased participation and is continuing to progress far beyond expectations.

Orthopedic Rehab Inc. for the Rehabilitation of a Patient after a Multiple Trauma Accident

This patient is a 54 year old male who fell 40 feet out of a tree while trimming branches at work. He was airlifted to the hospital and was placed in intensive care with less than a 50% chance of survival. His injuries included internal bleeding, fractured tibia and fibula, fractured left femur, ACL and MCL tear, elbow fracture, wrist fractures and more. He has endured 19 total surgeries to date including 4 hardware removals.

When he began his aquatic therapy at Orthopedic Rehab Inc., his goal was to be able to return to his job as a logger as well as return to playing softball and hunting.

He has made and continues to make great progress toward his goals. At his initial evaluation the patient was not able to walk more than 100 yards and at the time of discharge he was able to walk over 1,700 yards.

As of today, he has returned part time to his job as a logger which includes walking and hiking a couple miles a day. He has also returned to some of his recreational activities since participating in aquatic therapy. Both therapists, Teresa Kropp and Alysaa Kranz, have no doubt that without the integration of aquatic therapy into their patient's rehabilitation program he would not be where he is today. This patient suffered a near death accident, but because of the technology of their HydroWorx pool and his hard work, he has been able to regain a quality of life that is close to his pre-accident active and healthy physical condition.

This public voting page will be open through February 1, 2016 at 11:59pm EST. Individuals are allowed to vote once per day. At the conclusion of the open voting period, the winner of the public’s vote will count as 1 vote. The finalists will also go through a judging process by a panel of six independent judges. Each judge's final selection will count for 1 vote toward the winner for a total of 6 votes in addition to the 1 public vote.

The winner of the 2016 Healthcare Excellence in Aquatics Award will be announced online, on our Facebook, Twitter and blog, on Friday February 5, 2016.